On Saturday, February 11, 2012, Brian Morris, AJ Lang, and I performed our first rainfall simulation experiments on a freshly re-opened forest road approach to a stream crossing at the Reynolds Homestead. I had been looking forward to this day for a long time, for sure. Clay Sawyers had re-opened six of these road approaches in the beginning of August 2011. By the end of September 2011, all road approach plots were instrumented with open-top box culverts to redirect surface runoff and sediment into dirtbags located at the toe of the slope, just before runoff reaches the stream. We’ve been measuring monthly sediment yield (Mg/ha) from these approaches since September 25, 2011. Most of the sediment measured thus far came from the first measurement period (Sept. 25 – Oct. 24), during which 116 mm of rain fell on the newly re-opened approaches. Heavy leaf cover and a reduction in loose sediment available for transport has kept sediment yields low since that time. From October 2011 to the present, we instrumented one of the plots, a 77-ft, low-gradient (6%) approach, with automatic tipping-bucket and wedge-type rain gauges (11 total), a 1″X18″ cutthroat flume, and water level logger. In addition, we instrumented the plot with irrigation pipe and risers (every 20 ft.) and performed several practice runs to prepare for the first day of data collection.

We wanted to simulate several consecutive high-intensity rain events on a newly re-opened bare forest road. Because six months had passed since Clay re-opened the road approaches, we had him make several passes on this approach just days before the experiment. Indeed, this loosened the soil and reduced the protective cover of the fallen leaves. By the time we were ready to begin, leaf litter cover had been reduced from approximately 80% to 25%. While AJ and Brian primed the pump and programmed the ISCO to collect samples from the surface runoff, I set about collecting soil samples from the road surface with a bulk density hammer for analysis of antecedent soil moisture, particle size, and bulk density. After we had re-instrumented the plot with rain gauges and set all of the equipment to start recording, I hollered to AJ and Brian to fire up the pump.

The pump’s engine roared, but nothing happened. The intake hose was no longer primed. We all went back to the pump and waited anxiously for the intake hose to fill completely. We re-started the pump and through the riparian zone canopy we could see the rain spiraling up from the riser heads and falling down upon the study plot. We ran out to the plot to check for blowouts from the irrigation pipe connections. We were good to go!

Surface runoff started within a few minutes. Water pooled up at the base of the plot, just before the culvert. A few minutes more and we witnessed the hydrologic process of fill-and-spill as the pool flowed over into the culvert. We reached steady state runoff in 15 minutes and continued the rainfall simulation for another 19 minutes (total rain duration = 34 minutes).

We collected 18 runoff samples for analysis of TSS concentration during the first experiment. Initially, we decided to do a composite weight of the dirtbag after we had completed two additional rainfall simulation experiments because water was draining so slowly from the bag. However, during the second experiment 1.5 hours later, runoff began to back up from the dirtbag and into the flume 23 minutes into the experiment. We shut the pump down before we lost any of the runoff. For the third experiment, we unhooked the dirtbag from the culvert-flume-PVC pipe connection and only collected ISCO runoff samples to quantify storm event sediment yield. It was evident that water was not passing through the dirtbag fast enough to prevent ponding up into where water level is being monitored in the flume. At the end of the day, the dirtbag drained enough that I could weigh it. After two rainfall-runoff experiments, the dirtbag weighed 48.6 pounds, soaking wet. A sediment sample was taken from the dirtbag for analysis of gravimetric soil water content. Fine sediment was observed to pass through the dirtbag during the simulation experiments.

Here are a few pictures from the day: 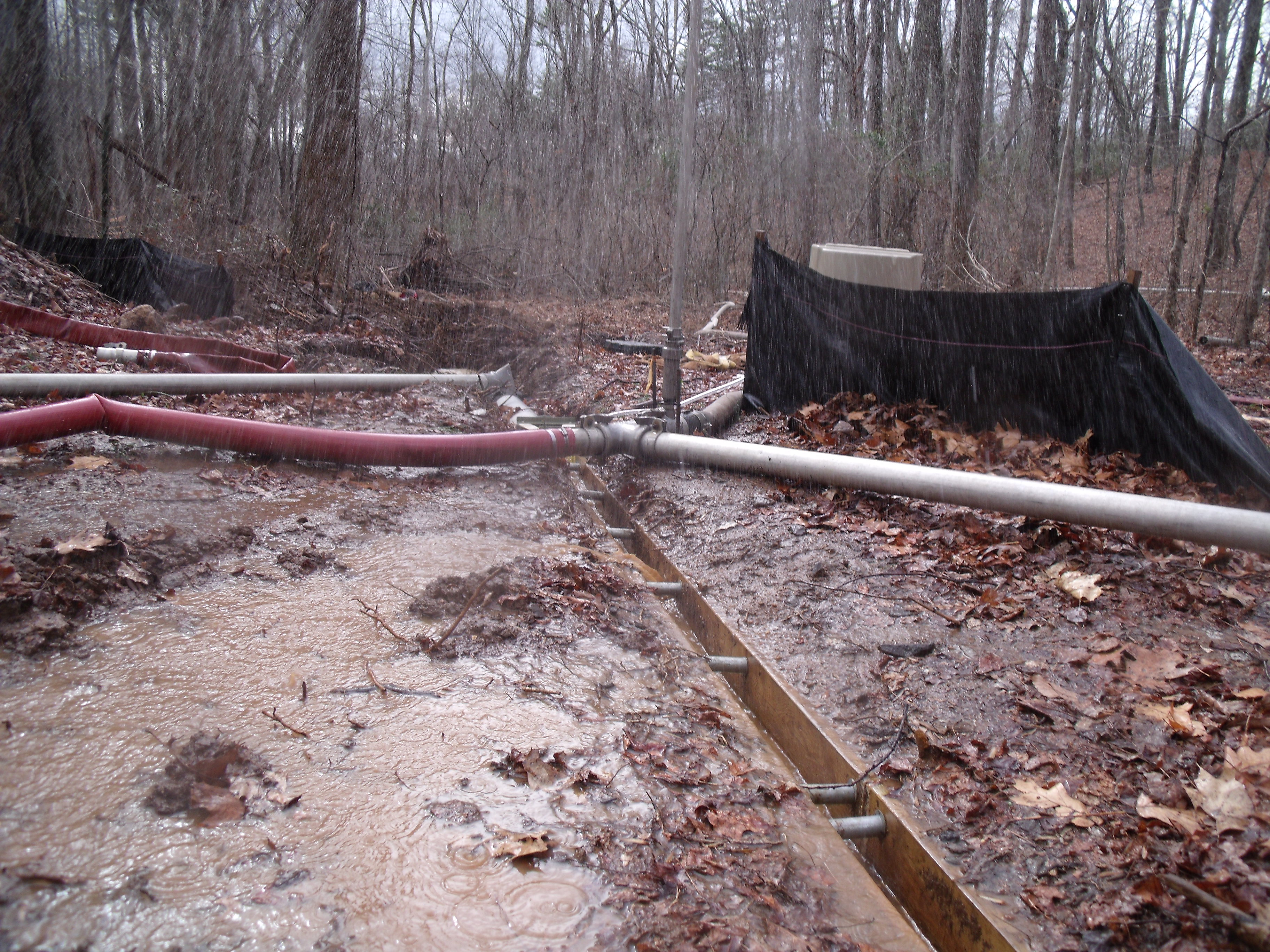 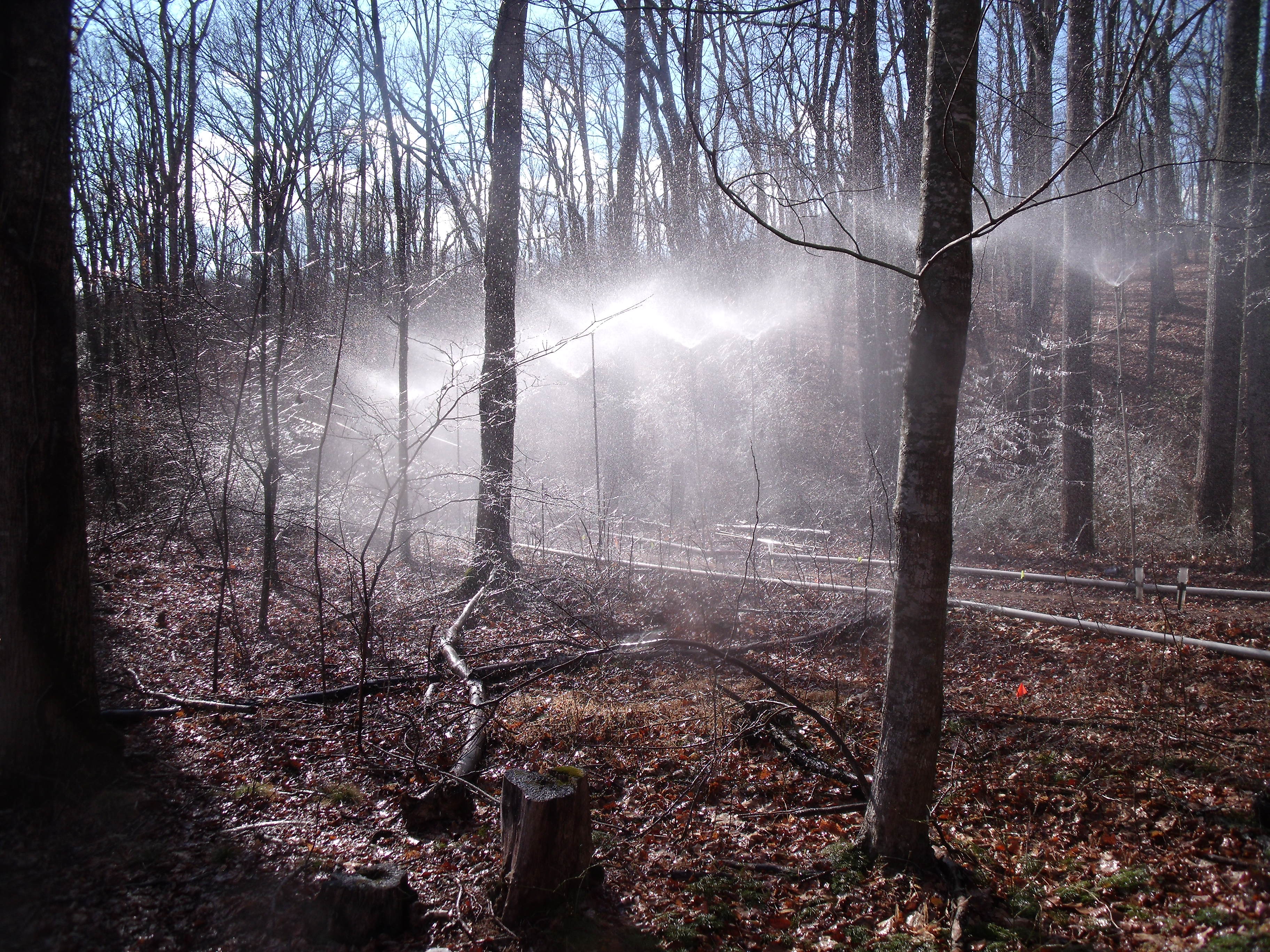